Had an outstanding weekend in Sacramento. It was really powerful listening to New <>s Sid and Rup from Toronto. When they were getting recognized, all I could see in his eyes were FOCUS. You can see that his work ethic speaks so loud that he doesn't have to say much. I really liked what he said about game planning. He said, " I would rather play the game than spend hours and hours game planning". Thanks Sid, your message is well received.

I pray for the courage to lead, the heart to care, the strength to rise up above the ordinary.

All distractions will fail against me because I am focused.

Where is your heart?

My coach shared this video during his training and this video really shows what one is capable of once you have the heart in it.

Tears roll down my face as I watch this video clip from the movie, "Facing the giants."  I love watching someone go beyond what they were ever able to do before. I love seeing someone pull the best out of someone else. I love witnessing the power of a passionate heart. I deeply want people to see this and understand

You can do so much more than you "think" you can. If you really understood your own potential, it would give you goose-bumps. Don't buy into the limited thinking that is all around you. Don't listen to the negative voice in your head. Don't wimp out. Don't give up. You have greatness within you that is aching to burst out! Tap into it. Let your heart lead your life. Pursue your true passion and purpose with everything you have! Please watch this clip through to the end before reading this post.

What do you notice in people?

Got up early..Thanks to my favorite alarm of all time, my little boy Ashwin. After changing his diapers and feeding him, he went to bed. I am still up. But the best part about getting up early in the morning is you have the time to do your reading as well as time for reflection.

I am in the process of finishing the book "Bringing the best in people"... This is what I got from todays reading and reflection.

People step into the stories you create for them. People generally behave in a way that meets the expectations you have of them. People generally conduct themselves in alignment with the belief, faith and trust you've developed around them. And they mostly behave in accordance with the tightly cherished perceptions that you've structured about them.

Tell your kid that he's your hero each morning and that kids going to shine like The North Star for the rest of his ife (tell your kids they're amazing at least 100 times a day; and hug them like you'll never see them again). Tell your associate  that you wish you were half as good as them and you've just created a space of possibility for that human being to step into (and up to). Tell the person who serves you your next restaurant meal that you appreciate them and then flash the most honest smile you can muster (doesn't matter if your tired - leaders do what's right versus easy). Do so and you've just reminded a human to be human and spread some of your stardust.

I have watched, observed my coaches practice this all the time and they tell good stories. What I have learned from them is , for every person you meet, suggest (by your words, your tone, your behavior and your energy) that you have a story deep in your mind of how great they are. See the best in people. Look for the greatness inside them. Remind people that they were meant to shine. By the stories you tell them. About their magnificence.

Posted at 05:33 AM in Achievers, Attitude, Character, Gratitude | Permalink | Comments (0)

Once upon a time a very strong woodcutter wanted to work in a lumberyard and since he is physically well built, he got the job offer. His salary was really good and so were the working conditions. For that reason, the woodcutter was determined to do his best. His boss gave him an axe and showed him the area where he was supposed to cut the trees.

The first day, the woodcutter brought 15 trees. “Congratulations,” the boss said. “Carry on with your work!” Highly motivated by the words of his boss, the woodcutter tried harder the next day, but he only could bring 10 trees. The third day he tried even harder, but he was only able to bring 7 trees. Day after day he was bringing less and less trees.

“I must be losing my strength,” the woodcutter thought. He went to the boss and apologized saying that he could not understand what was going on.

“When was the last time you sharpened your axe?” the boss asked.

“Sharpen? I had no time to sharpen my axe. I have been very busy trying to cut trees…”

This story sounds very logical, but how many times have we asked these very relevant questions. Most of us never update our skills. We think that whatever we have learned is very much enough. But good is not good when better is expected. Sharpening our skills from time to time is the key to success.

When I do my prayers, I do not pray for God to make things easier for me. Instead I pray for:

- Clarity to help me make the right decisions.
- Strength to keep going even when I am tired or exhausted.
- Courage to pick me up when I am emotionally down.
- Patience to guide me find the right people.
- Heart to help me lead the team who have placed their trust in me and always set a great example for the team to follow. 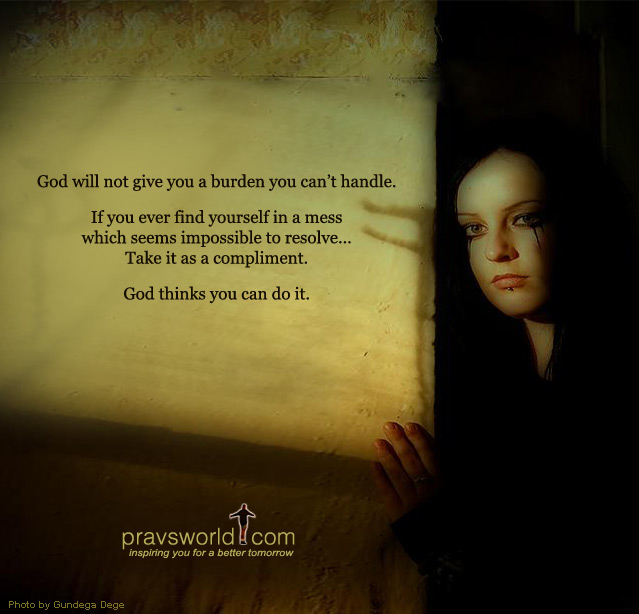 Bringing out the Best in People 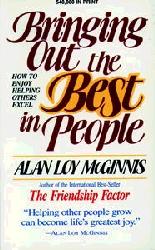 Today morning I got up around 4 AM to change diapers for little Ashwin. After feeding him and trying to get a burp from him,  I got sometime to read one of my favorite books of all time. I would like to share what I got from it..

In his excellent book, "Bringing Out The Best In People", Dr. Alan Loy McGinnis cites a quote from Thomas Aquinas: "When you want to convert a man to your view, you go over to where he is standing, take him by the hand and guide him. You don't stand across the room and shout at him; you don't call him a dummy; you don't order him to come over to where you are. You start where he is, and work from that position. That's the only way to get him to budge."

Apparently, people haven't changed much since the 13th century, when that statement was made. And, the chances are, people won't change much in that regard over the 'next' eight centuries, either. Attempting to change a person's views by telling them how wrong they - or how right we - are is perhaps the most counter-productive "persuasion" method there is. Yet, how many times have we done that? (How many times have 'I' done that?....more than I'd like to admit.)

In teaching us how to lead and persuade more effectively, Dr. McGinnis relates the story of one of the country's top salesmen of the early 1900's, J. Elliot Hall. Hall said he'd first been a failure at selling because he had been making "too many positive statements." That sounds a bit silly, doesn't it? But, according to the author, Hall explained that his mistake had been "to spend too much time trying to extol the product and too little time asking questions of the prospective customer." He eventually changed his style from "telling" to asking questions that would "help the other people to recognize what they want, then {I could} help them decide how to get it."

Wow! How profound. And, please keep in mind that, in the persuasion process, the other person is our prospect for whatever it is we are selling (idea, concept, plans for dinner, political preference, etc.). What McGinnis suggests then is, rather than tell a person why they are wrong, or why we are right, "to make a thorough study of the other person's needs." And he makes a lot of sense. After all, only by first understanding their feelings, their belief system, their view of the world - and the specific issue at hand - are we in a position to move them to our side of an issue.

Remember what Dale Carnegie, author of the classic, "How to Win Friends And Influence People" said, "People do things for 'their' reasons, not ours. So find their reasons." Do this, and I can practically guarantee your positive persuasion rate will shoot through the roof.

See you at the top!