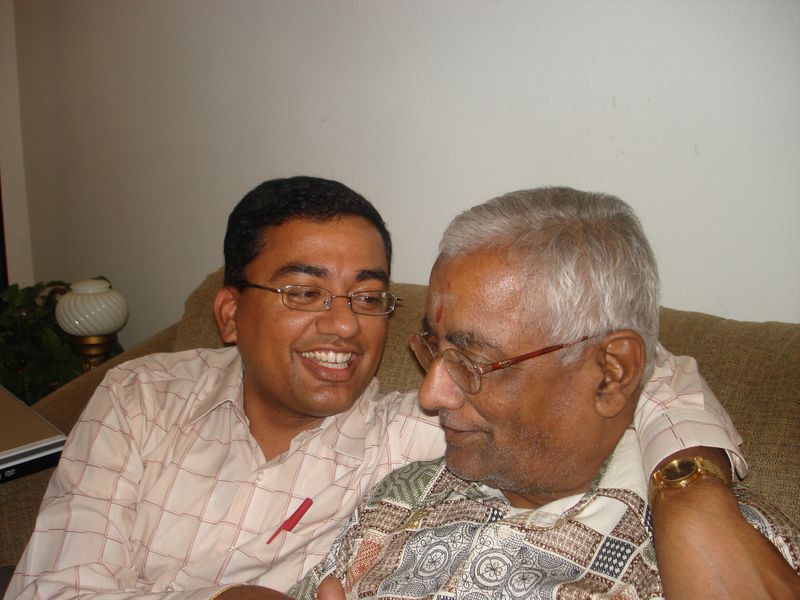 Hey dad, been a while since I talked to you. We miss your mighty physical presence. It's been nearly four months since you went to be with the Lord and it's not getting any easier. In fact, with each day, the pain is pretty unbearable at times. The loss is equal to a thousand yard, gaping hole in the earth caused by an unexpected meteor. Well, last Sunday was Father's Day. It was the first without you and to be brutally honest, it was tough. I tried to put a nice face in front of mom and Shobana. I didn't want them to get depressed. Rather than hiding and bottling up my emotions, I try to let my fingers do the talking here. Last year, right around the same time I was awarded "Outstanding Teacher Award" from my workplace and more than myself, you were bragging and boasting all over the place. You have always done that. I always felt like million bucks when you did that.Thanks for always being there for us.

For people who are reading this, I got to tell you, it is a special relationship. I lost my dad to renal cell carcinoma (Kidney cancer) few months back. It seems like it was yesterday. And I miss him every single day. But even though he is gone, he is with me every day in the lessons he imparted to me as a loving, caring, concerned parent.I realize every day how lucky I was to have him in my life. How lucky I was that he was around and involved in my life and my development.

My father was a great guy. When Aravind and I were little, he used to come early from work and play Cricket with us. Even during the weekends we have played with him countless number of times. He was a sort of “Renaissance Man,” had friends from diversified fields, different age groups was well read and brilliant, knew a lot about everything, and was fiercely loyal to his family, friends and his workplace S.B.I. He taught us to believe in God, give your best and leave the rest to God.

He taught us to do the right thing and be honest to others. He always told the truth but might not have packaged it well. Most of his friends liked him for being candid and he would never gossip or talk behind their back. But the most important things he taught us were not through words. They were through actions. My father always acted with the utmost of integrity, loyalty, honesty, and charity.

And so I conclude my little treatise on my father — and the moral of all this for all those sons out there who still have their fathers with them: make every day with him count, listen to his advice, heed his admonition, weigh your words carefully and think twice before talking back, and above all, respect him for all that he epitomises. This way, you will never have any regrets when God does take him away from you eventually.Even if you don't share the same interests as your father, I hope that there are good memories throughout your life to know that his love means a lot and I hope that you're able to tell him that. In any case, if your father wasn't around. Show your mom some love today.If your dad is well and alive, give your father a hug today and tell him how much he’s meant to you in your life.

I was reading a book "Winning without intimidation"..The author talks quite a bit about handling anger.
A story is told of Abraham Lincoln’s secretary of war, Edwin Stanton, and how he was angered by an army officer who accused him of favoritism. Stanton complained to Lincoln, who suggested that Stanton write the officer a sharp letter.
Stanton did, and showed the strongly worded missive to the president. “What are you going to do with it?” Lincoln inquired. Surprised, Stanton replied, “Send it.” Lincoln shook his head, “You don’t want to send that letter,” he said, “Put it in the stove. That’s what I do when I have written a letter while I am angry. It’s a good letter and you had a good time writing it and feel better. Now burn it, and write another."
A WebMD study reveals that personality types and the ability to control anger may have an effect of heart health and one’s risk for stroke. In addition the study said, “People considered the least agreeable and the most antagonistic had a 40% increased risk for arterial wall thickening. This is similar to the risk imparted by having metabolic syndrome, a known potent contributor to heart disease.”
While there may be a Top Ten list of things that anger us at work, none of them are worth the serious health risks caused by stress and anger. So what is a leader to do and how can you get a grip on anger? Here are four tips to help you keep it all in perspective.
Don’t sweat the small stuff.
In his highly acclaimed book, Don’t Sweat the Small Stuff, Richard Carlson sensibly points out, “Often we allow ourselves to get all worked up about things that, upon further examination aren’t really that big a deal. We focus on little problems and concerns and blow them out of proportion. So many people spend so much of their life energy sweating the small stuff” that they completely lose touch with the magic and beauty of life.”  The next time you are tempted to look at how bad things are try counting your blessings instead.
Learn to laugh.
It’s been said that laughter is the best medicine. And while not every issue that makes you angry is a laughing matter, perhaps those issues wouldn’t make you so angry if you simply learn to laugh.
In his book, Rules of Thumb, Alan M. Webber says, “We all want to work for people who take their work seriously-and themselves not so much. Work is hard. Life is short. Shouldn’t we all rejoice at the seriousness of our work, and laugh at the foolishness that surrounds us?” That’s great advice. If you simply learned to laugh at what surrounds you instead of being angry it would completely change your outlook. It will also be good for your heart
.
Practice gratitude.
Be it stress, fatigue, work or personal issues, or a variation of them all; anger can cause you to miss the good that surrounds you. Norman Vincent Peale says, “One of the great principles of life is that of thanksgiving. Not only is giving thanks a recognition of past benefits, it is the activator of blessings yet to come. If in your life there is a paucity of blessings, it just might be that your tendency to thankfulness has grown weak and inactive.
”"What are you thankful for?
Subbu in last PASE talked about being writing twenty thing you are grateful for every single day.
Be proactive.
While I have given a few suggestions, there are plenty more good resources available to help you if this is a major issue for you. Additionally; taking breaks, getting proper exercise and rest, among others, will lead to a more positive approach to confronting your anger.

Leadership is hard and stressful at times. And it is only natural that on occasion anger can get the best of us. But if left unbridled it can cause long term problems. Get a grip on anger and reclaim the joy and challenges that each day brings.