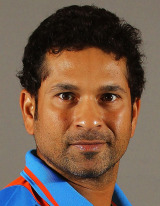 I am currently  reading the book "Playing it my way" written by the Cricket Legend Sachin Tendulkar (SRT).  I always want to know what he had to go through to reach the pinnacle of success he had achieved to be one of the greatest cricketers of all time. One of the stories which he shares in this book really shows what he is made up of.

SRT's career did not start the way one would expect. When he started getting coached from Ramakant Achrekar (RA), he moved schools to Sharadashram where RA coached. The first two games he played, he scored  two consecutive ducks. He scored 24 runs in the third game.     One had to score at least 30 runs to get the individual score published in newspaper. The scorer of the game mentioned to SRT  that he will make up his score to 30 (adding the extras of 6 to his score) and convinced SRT that it should be alright as he is not changing the total. In the excitement of seeing the name in the newspaper, SRT had agreed to fudge his score from 24 to 30. He was hoping he would get applause all over the place for this accomplishment. Instead, the following day SRT got the surprise/shock of his lifetime. Coach RA got really upset, shocked and unhappy after seeing the fudged score in the newspaper. He took SRT aside  and showed through the motion how unhappy he was with the manipulation. It taught him a valuable lesson of integrity and SRT promised that he will never do that again. What a powerful story and a powerful lesson! The instance clearly shows how his character is made up of.

I have seen lot of occasions where emphasis is given more on performance than integrity. So I have seen lot of people falter and fudge having the notion of doing whatever it takes to make things happen. Doing whatever it takes is good but it has to be done with integrity. Success without integrity is not long lasting.  Even though he might erred in this occasion, it takes a lot of guts to openly share it so that everyone can learn from it.  This is one of the reasons SRT was able to have outstanding success in the long run as he had all these values and principles deep rooted in him.