Devastated! I am devastated that Kobe, his 13-year-old daughter Gianna, and seven others were killed  in a helicopter crash in Calabasas, California, today morning.  My heart is with the loved ones of everyone who perished in that tragic incident. He was truly an inspiration  to many.

Remember shaking hands with this legend back in 2004-2005 at the Vons store Newport Coast between my tutoring sessions. He was easy to talk to and was very approachable. What is special about Kobe? He constantly worked on getting better.. Constantly worked on himself..Really fearless , Laker. Can't believe this news..I definitely wish this is not true. 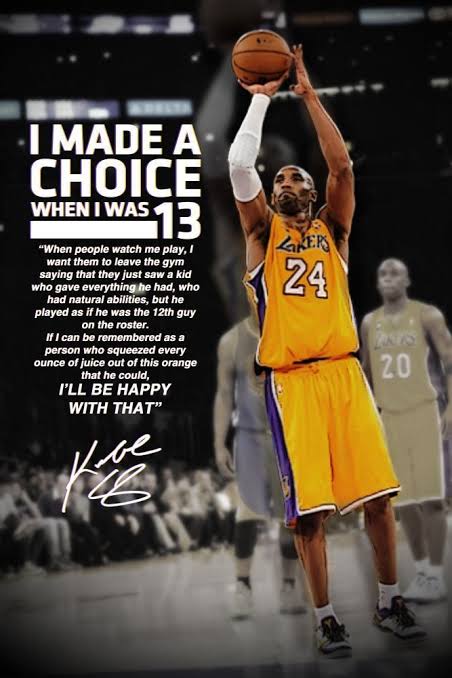 Last week, I had a tutoring session with one of my students who plays Junior Pro tennis and he shared an interesting story about Tennis champion Andy Roddick.

From what I heard from my student, he was playing final round of a Masters tournament in Rome against Fernando Verdasco from Spain. It was a match point in favor of Roddick. Apparently when Roddick hit his second serve, the line umpire had called the ball "out," and the crowd was cheering for Roddick. Verdasco had already moved towards the net to shake hands, as the match appeared to be done.

But Andy Roddick did not accept the point. Instead, he said the ball was "in" and called the umpire's attention to a slight indentation on the clay court which showed that the ball had landed on- not beyond- the line. Surprised by his act, the umpire allowed Roddick to overrule him and the point was awarded to Verdasco.

Everyone was amazed. In a game not typically played on the honor system- but on the umpire's calls- Roddick has made a call against himself and went on to lose the match.  The actual story is found here.

Though he lost the match he gained credibility and trust which is far greater. My dad would call this as good sportsmanship by Roddick as demonstrated through his action.

One of my favorite chapters in Math is Congruent triangles. For some reason, I always love the word 'Congruent'. Congruent triangles means one and the same.They have exactly the same size and shape. Two triangles are congruent when the three sides and the three angles of one triangle have the same measurements as three sides and three angles of another triangle.

When a person is congruent,  there is no gap between the intent and the behavior. People who are congruent work in sync with their deepest values and beliefs.  When we consistently demonstrate inner congruence to our belief systems and to principles, we inspire trust in both professional and personal relationships. When somebody does that, it tells the world that they are strong, solid and dependable and they are certain to have positive results which instills confidence in other people.

A crisis is a true test of character, my dad used to say. And given how several people find themselves in a crisis these days, it is useful to remember some basic lessons in surviving, and actually thriving in troubled times. Ups and downs are a part of business and of life but how you tackle the downtimes and low holds the key to the highs that might occur later in life.

A business you started could run into trouble. Or you could find yourself laid off. It happens. You may find yourself burdened with emotional upheaval. Or a health problem that lays you low. In such situations, it is important to ensure that you don't get petrified into inaction like a deer caught in a car's headlights. You must keep moving, keep trying, keep fighting. I am not saying just merely fighting hard in what looks like a hopeless situation would guarantee success. But remember, not trying and simply giving up- will only guarantee failure.

The greatest Olympian of all time would be Michael Phelps. He has won more Gold medals than some countries and the following story would teach you how he handled his downtime which paved way for his success.

Few months before 2008 Olympics, Michael Phelps was involved in an unfortunate accident that seriously jeopardized his Olympics dreams. In October 2007, as Michael was getting into a friend's car in Michigan, he slipped on  a patch of ice and  fell, breaking his wrist. Michael is known for his swimming abilities but he was a lousy walker.  Well, if he was worried more about his walking, he wouldn't have been a great swimmer. Rather, he chose to focus on what comes naturally-swimming. Anyways, cracked wrist meant plaster and it was a big blow to his Olympics preparation. He could not swim for the next few weeks. He was shattered.

Michael was disillusioned but quickly picked himself up and was back in the pool. With his plastered arm, he couldn't swim but he could lie in the pool, kicking with a kickboard while his Olympics teammates were doing doing laps. He just splashed and kicked away furiously. While that was no substitute for swimming, it had one advantage. He added incredible strength to his leg muscles.

Fast forward to Aug 16 2008, in Beijing. Having won six Golds, Michael Phelps was on track on the eight Gold dream. Just two races to complete. In the seventh event, 100 meter butterfly stroke event, Michael was neck to neck with Milorad Cavic. He won by the narrowest of margins, picking up his seventh Gold by edging out Milorad by a mere hundredth of a second. That's right-it was 100th of a second. As expert watched slow-motion replays, they found out that in the last 5 metres of the race, while an exhausted Milorad dragged his legs, Michael used a strong kick to get his hands to the wall first, going head by that hundredth of a second. The strong final kick made all the difference!

Napolean Hill says, "Every adversity , every failure, carries with it the seed on an equal or greater benefit."

Let us all remember that and be thankful for adversities to create yet another opportunity to start intelligently again.